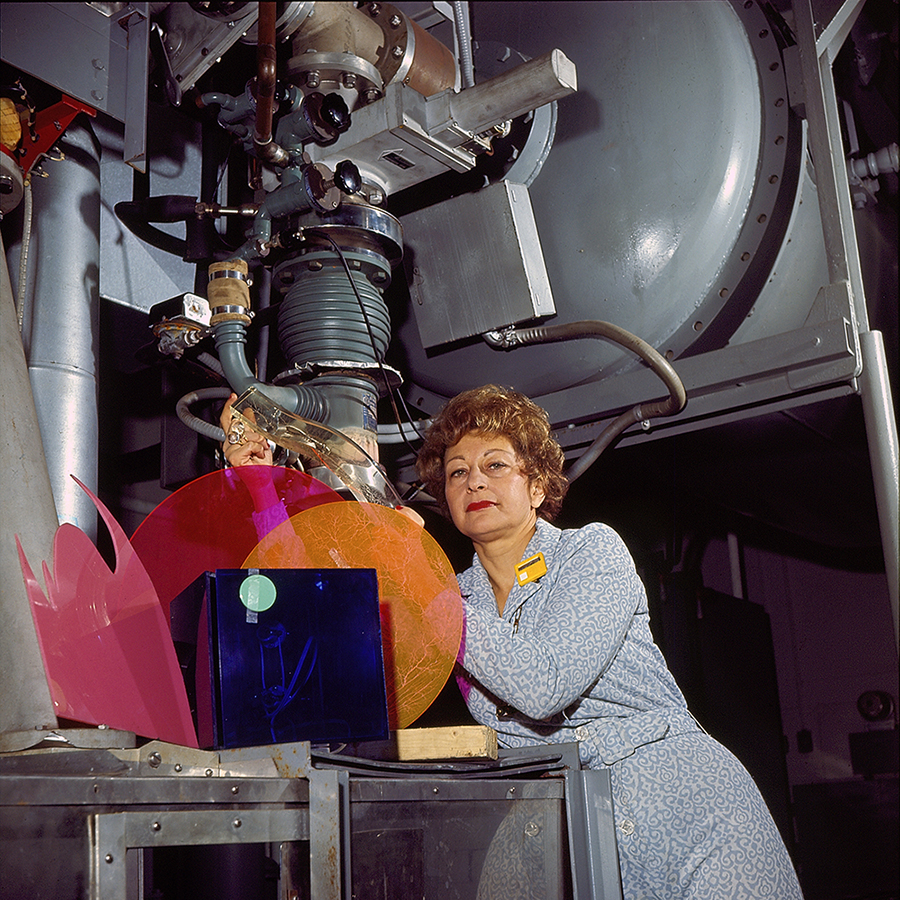 The following text is edited from the book, Alyce Simon: Artist of the Atomic Age. A PDF of the book, which includes essays by Judith Page and Bernard Finn, and forty-six illustrations, may be downloaded by using the above link. You may also request a copy of the book by writing to the foundation office. For additional information about Alyce Simon, click the following links to see images from the Spatial Paintings series and the Tree of Life series. For images of Simon's paintings and drawings, click Archive, and to read published articles about Simon, click Bibliography. Click the following link to read Atomic Matter by James Purdon, published in the January 2016 issue of Apollo: The International Art Magazine, which features Alyce Simon's sculpture.

In 2018, a major collection of Alyce Simon's Atomic Art was gifted to the Louisiana Art and Science Museum in Baton Rouge. The gift includes twenty-one sculptures from her Spatial Paintings and Tree of Life series, plus works on paper and archival materials.

Born in 1925, Alyce Rothlein Simon entered the world at the dawn of the atomic era, a time when physicists such as Niels Bohr, James Franck, and Wolfgang Paul were exploring atomic structure and quantum mechanics. She lived through the Great Depression, World War II, and into an era of nuclear optimism—the Atomic Age—when nuclear power was perceived as positive, productive, and modern. To Alyce Simon, an artist grounded in modernism, nuclear power became a vehicle for creating art that anticipated the future while reflecting beauty rather than destruction—a grand ambition that engaged Simon (and much of the world) until the Chernobyl disaster of 1986 ushered in an era of atomic resistance, when the promise of a better world through atomic power began to seem questionable and dangerous. The year that Simon passed away—2011—was also the year of the Fukushima Daiichi nuclear disaster, a catastrophe that belied Simon’s fervent hope that nuclear power would be harnessed for peaceful and beneficial uses. Simon, however, never gave up her dream that the combined creativity of the visual arts and the sciences would “bring about a more vivid and clear understanding of the world in which we live.” Her heartfelt desire was to express through her art “a hope for the future.” It was the aforementioned optimistic spirit melded with the willingness to take risks (and she took many throughout her long life) that defined Simon as an artist.

Simon’s introduction to the idea of using nuclear power to create art began at a propitious meeting in 1961 with physicist and President of Radiation Dynamics, Inc., Dr. Kennard Morganstern. After having seen her paintings, Morganstern suggested that she visit his company for the purpose of experimenting with the high-voltage particle accelerators that he manufactured. Simon was initially resistant to Morganstern’s offer but after making a visit to the radiation laboratory, Simon set up a studio at Radiation Dynamics and began testing materials such as metal, glass, wood, fabric, chemicals, and acrylics, and became increasingly aware of the exciting prospects now open to her.

Spatial Paintings was the first series to result from the use of the particle accelerator. As might be expected, there were crossovers from her painting practice, especially in the lyrical use of color, the infusion of space into the composition, and the painting-like format—rectangular and wall mounted. Throughout the period of experimentation and into her more mature phase, Simon became increasingly accomplished at controlling the effects of the particle accelerator. In a simple description of the process, Simon outlined how she “weakened” pieces of Plexiglas in a predesigned way (most often, by drilling tiny holes in the acrylic, which allowed the discharge to enter), and then exposed the Plexiglas to a high-voltage particle accelerator to break down its molecular structure. This allowed her to create fractures with a sharp linear quality, “similar to a lightning bolt streaking through the air—only it is not that random.”

In 1969, Simon’s first solo museum exhibition Atomic Art opened in the Hall of Nuclear Energy at the National Museum of History and Technology, Smithsonian Institution, Washington, DC and featured eight major spatial paintings. This exposure was a boon to Simon’s career enabling the exhibition to travel to three additional museums and generating a bonanza of publicity. While her public persona was soaring, in the quiet of her studio, Simon continued to refine her process, culminating in the Tree of Life series, a body of work that would occupy her for nearly fifteen years.

Trees were recurring subjects for Simon and she understood the iconic presence of the tree and its essential symbolism. She represented trees as nurturing, resilient, and singular entities that “symbolized the infinite and the eternal.” When Simon discovered through experimentation that she could create a tree-shaped fracture embedded in acrylic by controlling the entry for the discharge from the particle accelerator, it was a divine meeting of subject and object and the culmination of a lifetime of observation, research, and reflection. From 1970 through 1986, the Tree of Life series was her primary focus and her goal for this work, was a “marriage between the visual path that resulted from the discharge and the three-dimensional form of the acrylic sculpture.”

The Tree of Life series ended in 1986, when the particle accelerator at Radiation Dynamics was sold and Simon found it increasingly difficult to access other facilities. Despite losing her RDI studio and the use of its essential equipment, Simon blazed forth with new ideas. She renovated and moved to a studio in the Greenpoint section of Brooklyn. There she began work on a series of large-scale sculptures from acrylic and plywood that were expanded versions of the component sculptures from the Tree of Life series.

Beginning in the early 1990s, a series of accidents caused Simon’s health to deteriorate and she was eventually forced to give up her studio practice. In 1995, she moved to Santa Fe, New Mexico where she hoped to restore her health and to found a design studio to produce her component sculptures in small editions, not being able to do the demanding physical work herself. In 2005, Simon relocated to a lakefront home in North Carolina, near the headquarters of Tree of Life, where she spent her final years appreciating and studying the elements of nature that were the source of her art. When she passed away on July 20, 2011, she left an incomparable legacy of artistic achievement and a foundation that will pass on her philosophy of “giving back” to another generation of artists.